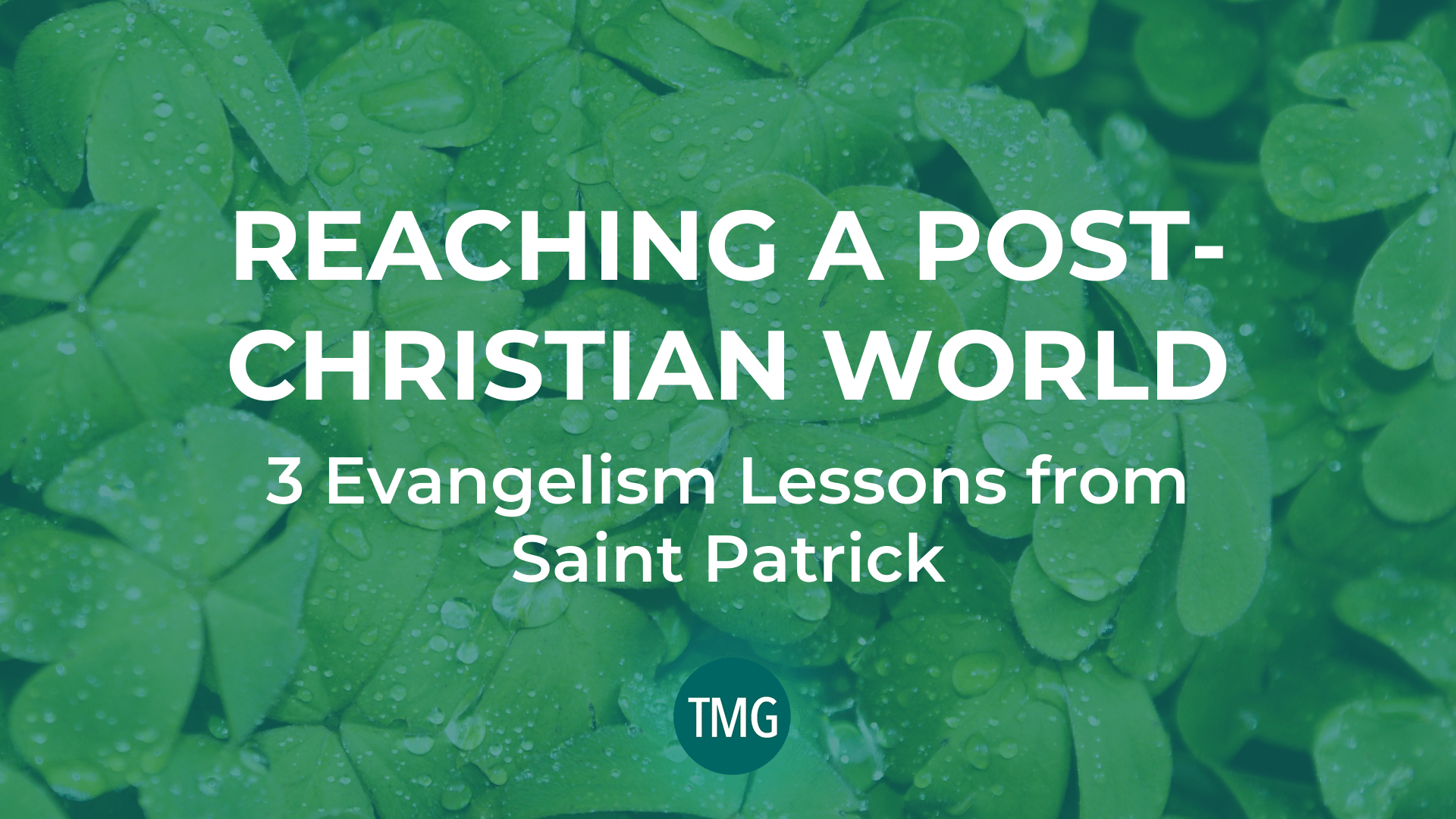 Before leprechauns, parades, green beer, and four-leaf clovers, there was a faithful Christian leader who ushered in a second-era of church planting that wouldn’t be seen again for centuries. The real Saint Patrick’s story is more relevant than ever for reaching a post-Christian world.

Reaching a post-Christian world might feel impossible. But leaders like Patrick remind us that God is able to use willing people to accomplish unimaginable things.

Let’s start with the cliff-notes version of the real Patrick’s story:

Patrick was born into a wealthy family in northern England. His grandfather had been a Roman Catholic priest, his father was a deacon.

At the age of sixteen, Patrick was captured by Celtic pirates and taken to Ireland where he would work as a slave for six years. Patrick’s faith became very real to him during his enslavement. His life was transformed by prayer and faithfulness to the gospel message he had learned as a boy.

At age twenty-two, Patrick bartered his way onto a ship and escaped his bondage. Eventually, Patrick became a faithful parish priest for many years.

This is where you would think his story would end. But this was just the beginning of God’s plan for Patrick.

At the age of forty-eight, past the life expectancy of the day, Patrick receives a vision. In it, he sees the Irish people calling him to come back to them. Patrick understands this to be his “Macedonian call,” and he doesn’t ignore it. Pushing through massive opposition, the church finally approves Patrick’s proposed mission to Ireland. But there are strings attached; no funding would come from the Roman Church. He would have to use his own family’s inheritance.

Leaving for Ireland with a team of priests, seminarians, and a few women, Patrick begins a very strategic mission. His team would win the approval of the local leadership, or at least the permission to begin a ministry, and would then pray for and help the local tribesman. This evangelistic engagement would continue until there was enough support in the community to build a mill and a church. These small communities acted as cultural centers where local people accessed common resources such as a mill for grinding grain and education.

Monasteries with community resources existed throughout Europe, but Patrick did not require baptism to access the resources. They were free and open to all. This was revolutionary.

Once the community raised up enough local leaders, a team went down-river to the next settlement and the process started again. Patrick utilized this systemic approach to church planting for the entirety of his twenty-eight-year ministry in Ireland.

The results of Patrick’s ministry are staggering:

By all accounts, Patrick accomplishes something incredible. If you want to learn more about Patrick’s story and his innovations in ministry, check out The Celtic Way of Evangelism by George G. Hunter III. The book is an enjoyable quick read.

What’s more staggering about this expansion of the gospel is the way Patrick does it. The lessons for reaching our post-Christian world are many, but let’s hone in on three.

1. You have to take risks to reach the post-Christian world.

Our culture passed the tipping point towards being post-Christian. This trend started decades ago, but it is now undeniable that the predominant cultural voices in western culture are secular and, at times, antagonistic towards religion in general and Christianity in particular. In Patrick’s day, there was an assumption that Ireland was unreachable because it was not part of the former Roman empire. It was wild and unsettled, and the Church believed that the people were barbaric and incapable of accepting the gospel. This is why they didn’t want to invest in Patrick’s vision.

Likewise, reaching a post-Christian world can feel impossible. People in contemporary society appear unwilling or incapable of receiving objective truth about God. Therefore, it seems impossible to reach them with the Gospel. But in Christ, all things are possible!

However, what worked in the past to reach our world with the gospel won’t work anymore. We need new methods and strategies to reach our new reality. This requires your church to spend money. If your church has anything beyond a rainy day fund, you need to be willing to invest funds in taking an innovative approach to reaching the next generation. Accept that not everyone will support new ways to do evangelism to reach the post-Christian world. Patrick had no support, only permission. That may be true for you, too. Don’t be deterred.

If God gives you a vision for evangelism, be faithful to it. Take the risks.

One of the most depressing realities of the Covid pandemic was discovering that most church buildings are totally unnecessary beyond the Sunday morning program. Thousands of church buildings stood mostly empty for months. The sad truth is that most church buildings are empty Monday through Friday, with or without a pandemic. In the past, churches were a central hub of family life and routine. Most churches have seen a significant decline in traditional Sunday night and Wednesday activities in recent decades. In the rare circumstances that attendance is static, the facility is still a gathering place for “Sunday people” on other days–not a community resource.

Patrick understood that the key to winning over the local community is to provide a needed resource. In our Strategic Envisioning training, we talk about the importance of understanding the psychographics of your community and how to meet the felt needs. In his world, milling grain was time-consuming and expensive. By providing a mill, he met a need and built trust.

What need can your church meet that no one else is adequately addressing? Lots of churches talk about opening a coffee shop. But in reality, does your community need another coffee shop? Or does your community need an after-school program, a jobs development program, a co-working space for entrepreneurs? What hole exists in your community, and how can your church meet that need? Also, what resource can your current facility enable you to provide? Don’t wait for a capital campaign and a new building to make a difference. Look at the needs of your community, look at your facility, and find the intersection. Retrofit if needed, but do something this year.

3. Reaching a post-Christian world requires a focus on reproducing your team.

Patrick’s vision was achieved within one generation, but he did not live long enough to see it through. But the work continued after Patrick because he not only had a system for planting churches but a system for raising up leaders. Patrick started with a team, and he always built a team while they built the mill and church.

Too many churches today are oriented around the leader and not the vision. So when he or she goes, so does the vision. What about you? Does your church rely on you to provide the vision? If you left your church today, what would happen to the vision of your church? Would it move on?

If you truly believe in your vision, your success is ultimately measured by its longevity through others–not in your personal achievements. Create systems for training more and better leaders. In our Leadership Pipeline Design service, we empower your church with a custom, implementable system for raising up leaders to champion a vision for reaching your community. Your legacy and the success of your God-dream hinges on how well you replicate yourself, not just replace yourself.

Reaching a post-Christian world is a difficult task. But God has proven faithful to do hard things through faithful leaders.

You need to innovate to succeed. You need to take risks. Think in new ways about facilities. Focus on leadership development.

Take these evangelism lessons from Saint Patrick to heart, and by God’s grace, you can leave a legacy of fruitfulness and faithfulness that stands the test of time.