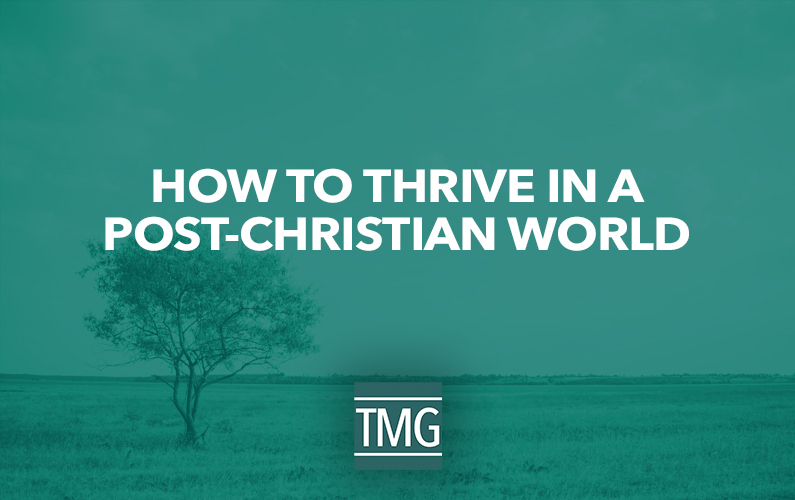 How to Thrive in a Post-Christian World

The world is full of darkness. The endless news of violence, tragedy, and pain is enough to make a person never want to leave their house. We know that the world has been dark since the fall of mankind, but the darkness in our age feels even darker and more oppressive.

I don’t think it’s any coincidence that the increase we have seen in violence and broken families is occurring at the same time as the decline in church engagement in the United States. Barna released their latest ranking of post-Christian cities, and it’s clear that the decline of the Church’s influence is widespread in the United States—not localized to the coasts. If you’re curious what is meant by the term, “post-Christian,” you can read Barna’s definition here. But to summarize, a post-Christian society is one that doesn’t see the Church as a vital component of societal rhythms nor the Bible as authoritative or beneficial at the personal level.

We could spend an entire article bemoaning why the Church has lost her influence, but that isn’t productive.

Instead, let’s focus on how your church can thrive in a post-Christian world.

Here are six practical things your church can do to thrive in a post-Christian world:

Put internal conflicts aside so you can shift your focus externally.

This is the fundamental shift that most declining churches fail to make. It doesn’t matter what your music style is, what the color of the carpet is, how dynamic the preaching is—what matters is where your focus is aimed. Churches that are externally-focused rarely argue about carpet and music; it takes care of itself. Conversely, declining churches have a rolodex of internal problems to distract them; they have no energy left to fix problems in the community.

To make this shift, it starts with the senior leaders. This might mean you have to compromise on some of these internal issues so you can put them to rest. It will certainly mean that you’ll have to choose not to engage in certain arguments (read: pick your battles wisely!). Unfortunately, it also means you need to cut loose the busy-bodies who want to argue rather than focus on your Great Commission mission.

2 Thessalonians 3:11 says, “We hear that some among you are idle and disruptive. They are not busy; they are busybodies.” This passage is talking about people who were wanting the benefits of Christian community (caring for one another’s needs), but weren’t willing to pitch-in to help the needs of others.

While the context is different, the principle is exactly the same. Declining churches pander to the idle and disruptive rather than “command and urge in the Lord Jesus Christ” (v. 12) to act differently as Paul did. Take a page from the Apostle’s playbook. Your church will never thrive in the post-Christian world while you’re distracted by internal conflicts.

The pastor at my home church loves to remind us of this frequently. He says, “People who solve problems get promoted; people who notice problems get fired.” In other words, it doesn’t take a genius to notice a problem, but it takes hard work and humility to try and solve one. This is true for churches, too.

Lots of churches like to point out the problems in society, but they don’t try to fix anything. As a result, society has “fired” churches. Post-Christian societies think the church is filled with hot air and little action. It’s why you see people post memes that say, “Your thoughts and prayers aren’t working,” whenever a tragedy occurs. They’re not wrong.

Prayer is important, but so is action.

I’m reminded of Nehemiah, who was a prayer warrior. He wanted to see Israel rise up from the ashes after over 100 years of ruin. But Nehemiah was a glorified slave—the cupbearer to a pagan king. What could he possibly do?

I love the prayer-action combo that we see displayed in Nehemiah:

“The king said to me, ‘What is it you want?’ Then I prayed to the God of heaven, and I answered the king, ‘If it pleases the king and if your servant has found favor in his sight, let him send me to the city in Judah where my ancestors are buried so that I can rebuild it.’”

Nehemiah prayed, and then he acted. He had a plan to solve a generational problem. Once the wall-building project began, it only took 52 days to complete. Think about that for a minute. No one had solved this problem for over 100 years, and Nehemiah led the people to rebuild the wall in a mere 52 days.

Have something to say, and say it well.

The declining churches I work with often say, “We just want to be faithful to preach the Bible.” That’s amazing. You should preach the Bible! These same churches, when we survey them, often rate their churches as low in spiritual vibrancy. How can that be? Isn’t teaching the Bible enough?

Before you get angry, remember that the people who knew the Bible best in Jesus’ time were the Scribes and the Pharisees. Being filled with Bible knowledge is not particularly useful when it’s disconnected from life transformation.

If you want to thrive in a post-Christian world, you’ll need to have a relentless commitment to connecting Biblical truth to people’s day-to-day lives. Don’t hear this point as an exhortation to get away from the Bible (it’s not!). Rather, hear it as an encouragement to “be doers of the Word and not hearers only, deceiving yourselves,” (James 1:22).

Be set apart by being clear on sin and tireless with grace.

The Church’s witness has suffered over the years because it’s been wishy-washy on sin. It treats the sins of people differently, depending on who it is. I don’t want to give specific examples because it would be unproductive, but if you’d shun a church member for cheating on his wife and ignore this behavior in someone else (for convenience), it’s hypocritical.

If something is wrong, it’s wrong regardless of who committed the offense.

For this reason, we must be tireless with grace. The Church’s witness has also been damaged because of an unequal distribution of grace. Certain people or sins are “forgiven,” and others are not—regardless of how repentant the sinner is (or isn’t).

We need to own this mistake collectively.

If we are to have an honest witness in the world, we cannot be afraid to call something sin. But we also cannot be slow to share the grace of Jesus. The Internet has made it very easy to highlight the Church’s hypocrisy, and rather than argue, we should be humble, repent, and act differently.

In a post-Christian world, churches can still call something a sin. But churches need to be consistent. Any hint of hypocrisy will be noticed by the outside world. Your integrity (not defined by your perfection, but by your consistency) is on full display and is more important than ever.

Be a refuge, not a museum.

If you want to thrive in a post-Christian world, your church cannot feel like a monument to the past. If your church looks, feels, and smells like the “good ol’ days,” don’t be surprised when people don’t come back. Be honest: Declining churches hold onto the past in their facilities and worship services because it comforts them, not because they think it serves an unchurched person.

Rather than being a museum that kindles fond memories of the past, become a refuge from our dark age. Be a “city on a hill that cannot be hidden” so that those who are unchurched might “praise your Father in heaven,” (Matthew 5:14).

People are hungry for a refuge. Loneliness is epidemic, and it is contributing (perhaps more than anything) to the darkness of our age. The HRSA says loneliness can be as damaging as smoking 15 cigarettes a day. The Church has the solution! Yet most would turn to the church last for community rather than first. It’s time for that to change.

Jesus is calling your church to be a light in the darkness. He is calling you to thrive in a post-Christian world. If the New Testament Church could transform the world in a pre-Christian society, how much more does God desire for us to transform our world?

We can solve generational problems, but we need to repent, turn our gaze outward, and engage the world with action.

CONNECT WITH A GUIDE