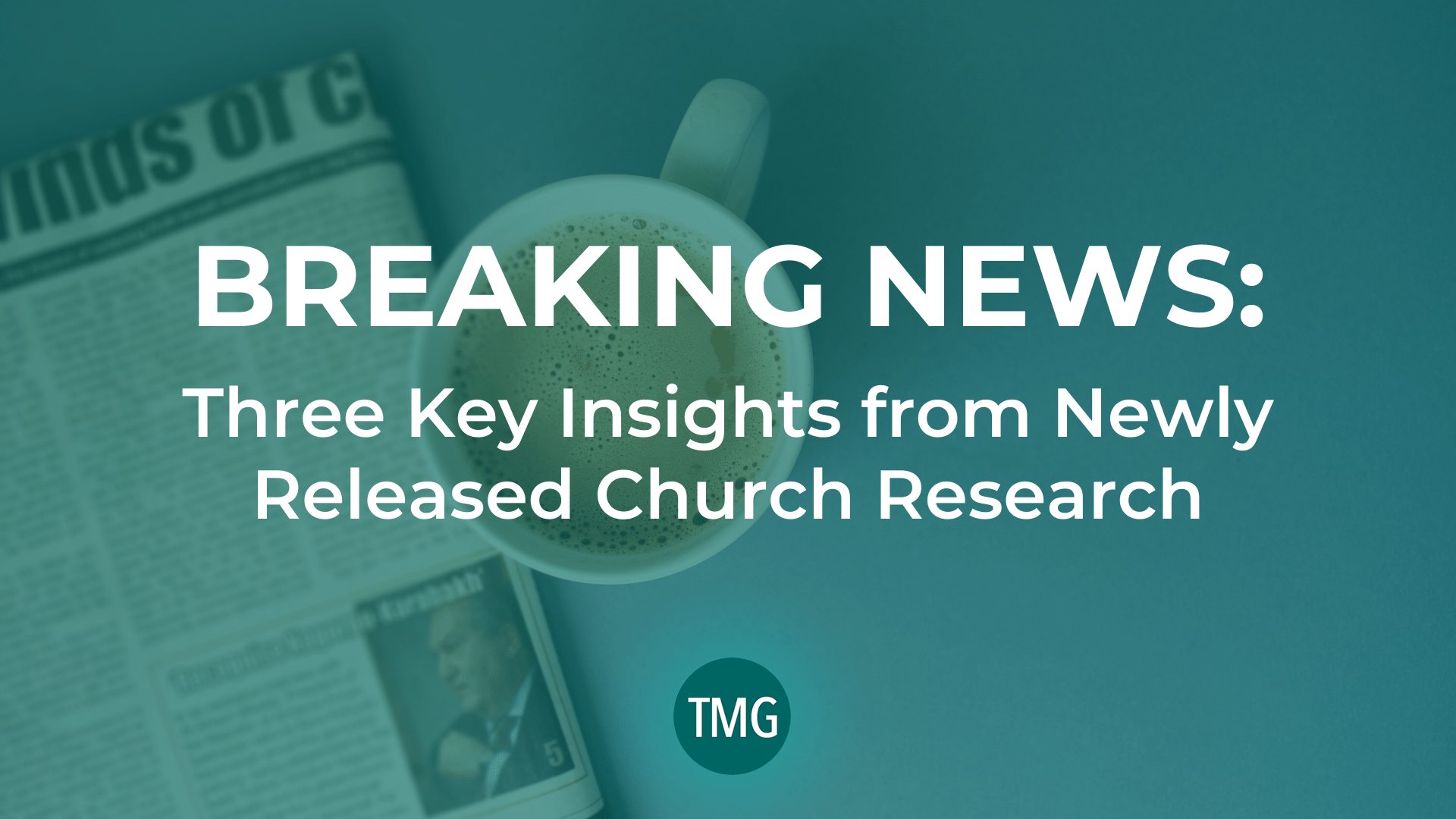 New church research indicates troubling trends in the American Religious landscape. Discerning churches will pay attention to these trends and act on their implications for their congregation. In this article, I want to provide three key insights that can spur your church on to health and growth in the years to come.

In July 2021, the Public Religion Research Institute (PRRI) released its latest findings after extensive polling in the United States. PRRI has tracked these trends for over a decade, and their findings are valuable for churches, pastors, and Christian leaders who want to see the Gospel flourish.

Truthfully, the recently released 2020 data is not filled with much good news for evangelical Christianity. In fact, all of the top line trends suggest that evangelical churches must overcome serious challenges and shortcomings in order to thrive. Below, I’ll share three key data points and how your church can respond.

The Evangelical Church Is Declining Faster than Any Other Religious Group

According to the church research study, “Since 2006, white evangelical Protestants have experienced the most precipitous drop in affiliation, shrinking from 23% of Americans in 2006 to 14% in 2020.” It’s an undeniable fact that evangelical churches are losing influence in the United States. While many factors have contributed to this decline, the most relevant question is: “What can we do to regain influence?”

It’s my firm belief that evangelicals must recapture the core word embedded in their title: evangelism. We must become people that care more about the “Good News” than anything else. As I work with churches across North America, I perceive that most are bogged down by in-fighting and stunted by bureaucracy. From our own internal data from working with churches, over 90% of church-goers believe that their church’s mission is in alignment with the Great Commission (Matthew 28:18-20), but a 56% of church goers admit that their congregation has no clear strategy for actually reaching their community. This cognitive dissonance between what evangelical churches claim to be about and what they actually spend their energy and resources doing is crippling us.

The late Andrew Breitbart famously quipped, “Politics is downstream of culture.” I think he was right. But he fell one step short in his assessment. Culture is downstream of religion. The evangelical church has lost influence because it has attempted to stake its claim in downstream issues. Many of our churches are more concerned with fighting the culture wars than they are about preaching the Gospel.

By no means should Christians abandon their core convictions, which certainly have political implications. But the Church will never win the war by fighting downstream battles. Instead, like Jesus telling Peter to put away his sword, we must be willing to engage the world the way Christ intended: by preaching the Good News. The solution to our culture’s problems isn’t found in fighting for a political savior, but by introducing people to the true Savior by sharing and living out the Good News.

American Christianity Is More Diverse Than Ever Before

Christianity in the United States is less white than ever before, though this shift is slow.

According to the study, “In 2020, around one in four Americans were Christians of color (26%). This is up a couple of percentage points since 2006.” What do the changing demographics of the country (generally) and of the church (specifically) mean for your congregation?

Your church and it’s leadership ought to reflect the shifting demographics of your specific area. Every community is different. Some have change significantly in the last decade while others have not. But if God is calling you to reach your neighborhood (He is), then it is critical that your church be a reflection of your community.

Diversity in your congregation should not exist as an act of tokenism but as a genuine reflection of outreach to your neighborhood. In our current context, some churches are pursuing diversity as an end in itself. This is not good. Tokenism and forced diversity are insincere, and everyone knows it–especially your neighbors. Instead, strive to reach the needs of your community. Win souls. Train leaders and elevate them, regardless of their racial or ethnic background. Allow this to happen in intentional but natural ways as you seek to reach your community. As you do, it is likely that your church will become more diverse.

But the church research discovered another insight as it relates to race and religion. White young adults are less likely to be Christians than younger adults of color. The research found that African American Protestants account for 8% of all Americans over age 65 and account for 5% of all Americans aged 18-29. This is a decrease in adherence, but it is modest. Historically African American churches are doing a better job of connecting with younger people in their community.

Conversely, 22% of all Americans age 65+ are white evangelicals but only 7% of Americans 18-29 identify as white evangelicals. Historically white protestant evangelical churches are failing the younger generation. The church is bleeding young people far more than any other demographic group, and it is killing the future of the church. This leads to the third insight.

The Evangelical Church Is Getting Older

Evangelical churches must confront the cold truth: despite its youth programs, youth pastors, endless curriculum, and “cool” approaches to ministry, we simply aren’t making a lasting connection with young people. It’s not an overstatement to suggest that if churches don’t make adjustments soon, that a large percentage of evangelical churches will die. More importantly, a generation of young people are facing an eternity apart from Jesus.

Evangelical churches must invest a disproportionate amount of energy and resources into reaching the next generation. While chasing “cool” is a proven failure, there are critical factors that impact the church’s ability to reach young people. First, we must leverage technology in new and innovative ways. There is no expiration date on a human being’s quest for meaning and significance. The church has the answer. But young people aren’t looking in your church–they’re searching online. Churches have failed to innovate and as a result, the Gospel isn’t being heard clearly. Most of the young unchurched have ideas about the church that are shaped by culture and the media rather than personal experience. Technology can help to bridge the gap.

The second solution churches must employ is to accelerate the development and platforming of young leaders. The average of senior pastors has also increased in the last decade. There are fewer and fewer pastors under the age of 40. This means that as pastors begin to retire, there will be a massive leadership vacuum in evangelical churches.

Aging pastors must shift their focus towards legacy building. You have a valuable treasure–decades of wisdom and experience. Rather than clutching onto your position for another five years before leaving your church to search for an untrained and inexperienced pastor, consider bringing on a successor that you can serve alongside. Go part-time before retiring. Sow your wisdom into an emerging leader.

We must stop thinking of millennials as “youngsters.” The oldest millennials are nearly middle-aged! It’s past time to start elevating young leaders, platforming them, and investing your collective wisdom into them. Research consistently shows that the faith of the next generation languishes when young people are not engaged in service. Let’s raise up future leaders by investing in them, so that we can share the platform with them(and ultimately pass it on to them).

This church research is a bit like a shot across the bow. It stings. It shows that we have failed in many ways.

But research is not fate. And your church can resist these trends. We see it with the churches we work with every day. Decline is not inevitable.

If you’re unsure where to start in helping your church reverse the trend of decline, check out the Church Ministry Analysis. This service costs less than a hundred dollars, and includes a handwritten report and a virtual consultation between our team and your team. This assessment will give you a clear picture of what’s happening in your church, what’s healthy, and what’s unhealthy. It’s a low-commitment step that helps your church get started in revitalization. Download a sample report here.

If you already know you need a revitalization process, check out our Strategic Planning page. We have self-guided, online process that is affordable so that any church that wants to change can have the resources to do so. You can even access a free 14-day trial of our online process with no strings attached.

Churches get the best results when they partner with an outside Guide. It’s really hard to replace a set of objective eyes and our team has worked with hundreds of churches, so we’ve seen a thing or two. But the Malphurs Group is a non-profit organization–and so it’s reflected in our pricing. We offer on-site consulting at a fraction of the cost of other organizations. You can download a sample proposal from our site. We’re up-front and transparent about our process and what it costs. We believe you deserve that.

The only sure-fire way that your church will decline is if you do nothing. Your church can be healthy, grow, and make an impact for the Kingdom. But nothing changes until you do. The next step is yours.