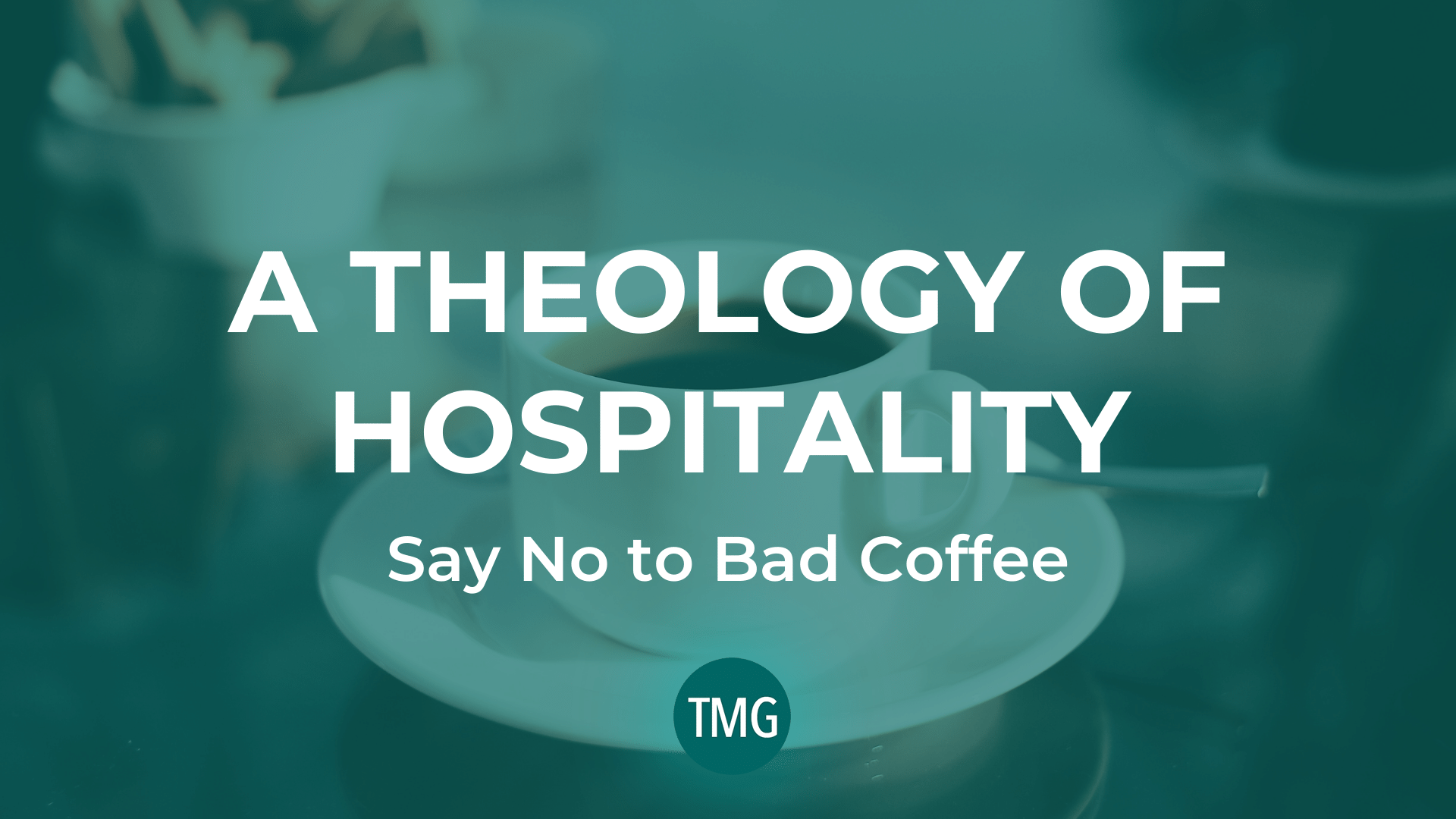 A Theology of Hospitality: Say No to Bad Coffee

Good coffee matters, and so does your theology of hospitality.

A few years ago, I was put in charge of making the coffee at my church for a small group event in the summer.

I’m the master of making coffee in my own home with my own coffee pot. I’ve got the measurements down… but let’s be honest, I mostly use a Keurig.

But making coffee in the large, commercial coffee maker at the church? Foreign territory.

I had been trained by people who knew how to do it, and yet more than half the time, I still got it wrong somehow. The coffee I was brewing looked and tasted like motor oil. A coffee stirrer would stand straight up. It was thick. It was disgusting.

I had tried, and that’s what counts, right?

Maybe in this small thing yes, but when it comes to the hospitality ministry of your church… no.

The hospitality ministry of your church makes a significant impact on guest retention at your church. Did the greeters smile? Did they open the door? Was it easy to find the coffee? Did it taste like motor oil? Was there cream and sugar? And not that powdered stuff. Come on, no one likes that.

I can hear your protests from here already: We’re running a church, not a hotel! We aren’t a mega church! We’re here to worship not cater to the creature comforts of guests! People don’t need a mint on their chair, but the gospel of Jesus.

But let me counter that sentiment with some Scripture.

“Let brotherly love continue. Do not neglect to show hospitality to strangers, for thereby some have entertained angels unawares. Remember those who are in prison, as though in prison with them, and those who are mistreated, since you also are in the body.”
– Hebrews 13:1-3 (ESV)

Okay, I can hear your complaints again. Showing hospitality to strangers, widows, and orphans is a far cry from making sure church services are comfortable for visitors.

The concept of hospitality in both the Old and New Testament is fundamental to living out the Gospel. From Abraham all the way through the history of the early Church, there’s an undeniable understanding that the people of God are to be generous and hospitable. They understand that the foreigner and oppressed are in plight because they do not have a place within the covenant community.

The guests to your church are nothing if they aren’t outsiders, which makes the hospitality you show them (or don’t show them) fundamentally revealing about your theology. It is critical that churches have a healthy theology of hospitality.

Saying no to bad coffee isn’t about having a five-star experience, it’s about living out the Gospel well by treating guests in your church at least as well as you’d treat a guest in your home. When you have a visitor at your house, I’d think it rare that they let themselves in, be made to find their own seat, find their own refreshment, and talk to no one.

You answer the door, offer them refreshment, give them a tour, sit with them, speak with them.

Have you ever wondered why Lot doesn’t get burned up in Sodom?

He hadn’t revealed himself to be such a great guy. He took advantage of the father figure in his life, Abraham. He moved close to a wicked city. Then he moved into the wicked city. Then he became a prominent public figure in the wicked city—which must have required at least a modicum of wickedness to be accepted and fit in. Lot doesn’t even try to flee the city quickly when he’s told it’s going to be destroyed—the angels literally pick him up to move him and his family out-of-town. Paragraphs later, Lot drunkenly (and to be fair, unknowingly) sleeps with his own daughters. He’s not a bulwark of holiness.

Why does he get saved?

You could argue that he’s saved for Abraham’s sake, but I don’t think this is the case.

When the angels come to visit Lot and warn of the coming destruction, Lot welcomes them into his own home and protects them at all costs from the wickedness in the city streets. It’s an act of hospitality. Not the high-quality hospitality witnessed by Abraham a chapter earlier, but hospitality nonetheless. Lot understood that his faith (or fear of) God demanded that outsiders be held in high regard and were worthy of protection.

Hospitality is powerful. It reveals who we are as a people. When we believe the Gospel, we treat people differently.

So, this Sunday—don’t serve your guests bad coffee. Pay attention to how newcomers are treated, and put some intentionality into your guest experience.

What does that look like practically? Download this free e-book 10 Simple Secrets to Transform First-time Guests into Regulars. In it we give ten detailed ways you can live out Gospel-centered hospitality to guests.