The State of the American Church: Plateaued or Declining

The State of the American Church concerns me. 80-85% of churches are plateaued or declining.

In the mid-1960’s church leaders began to notice a disturbing trend in the state of the American Church. Something previously unnoticed in America: many major denominations had ceased growing.

“Today, of the approximately 350,000 churches in America, four out of five are either plateaued or declining. Many churches begin a plateau or slow decline about their fifteenth to eighteenth year. 80-85 [percent] are on the down-side of this cycle.”

After the shock wore off, Christian leaders began to examine more closely the state of the American Church. Arn’s statement proved to be disturbingly accurate! 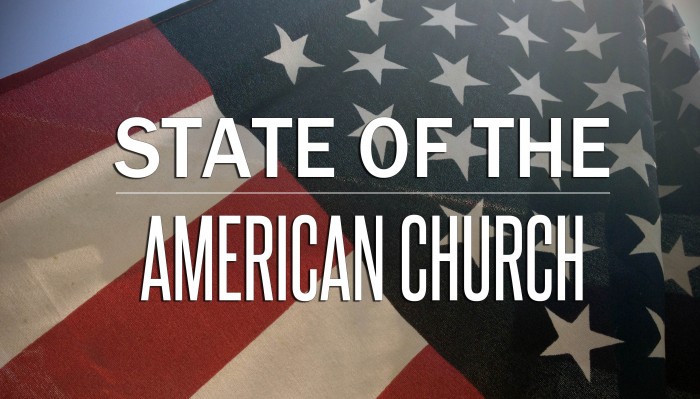 Troubling signs appear at every juncture when it comes to the state of the American Church. Church researcher David T. Olson pulls information from 200,000 churches and found that “the conditions that produce growth are simply not present. If present trends continue, the church will fall farther behind population growth.” He demonstrates that the percentage of the population attending a Christian church each weekend will decline from 20.4% in 1990 to 14.7% in 2020.

Church researcher, Thom Rainer, describes the state of the American Church based on his years of consulting with many different churches and denominations. He writes,

“Eight out of ten of the approximately 400,000 churches in the United States are declining or have plateaued.”

He also found within his research sample,

“84 percent are declining or experiencing a growth rate below the population growth rate for their communities. The latter is defined as a plateaued church.”

While speaking at the Great Commission Research Network in 2011, Gary McIntosh declared,

“I have been working with a judicatory in the Midwest. In their district 97% of the churches are in decline. Not plateaued, but in decline.”

The Church of Jesus Christ in North America is in a free fall with no bottom in sight. A leader within a large denomination in the Rocky Mountain Region stated,

“I am reluctant to direct you to pastors who have led churches into decline; not wanting to subject them to further humiliation.” He could only supply the name of one turnaround pastor. Another regional leader wrote, “We do not have any pastors in our district who meet your requirements for turnaround.” This means that this judicatory has no churches growing at a minimum rate of 2.5 percent per year! (It should be noted that the growth I refer to here is numbers of people).

These examples from different regions reflect the realities that denominations, districts and churches face in present day America. The need for revitalization is great. Struggling churches, disillusioned pastors and disenchanted believers litter the church landscape. Many of the survivors have no vision for the future! They are simply hanging on by their fingernails hoping for a better day.

“We can no longer simply ignore struggling churches. We must give attention to these churches before they die or we all lose!”

After reading about the gloom and doom, we could easily give up and quit. However, I think there are at least three proper responses to the state of the American church.

With proper care, plateaued and declining churches can become healthy and improve the state of the American church. Oftentimes pastors find they need outside leadership coaching or a strategy consultant to come on-site to guide the church in the shifts needed in order to achieve vision clarity, a strategic plan, and a leadership pipeline.

We focus on the profile of the Turnaround Pastor in my book Re:Vision: The Key To Transforming Your Church.

2) Some Churches Need to Close Their Doors

These churches have outlived any further usefulness, and need to die with dignity — investing their resources in healthy church plants and church renewal efforts.

3) Church Planting To Improve the State of the American Church

Healthy churches are normally the incubators of church plants. Vibrant, healthy churches produce healthy, vibrant offspring. This will begin the reversal of the declining and plateauing patterns we see within the Church today.

We need to work together to change the state of the American Church.

=============
Dr. Aubrey Malphurs is the Founder and Visionary Leader of the Malphurs Group and the Senior Professor of Leadership and Pastoral Ministry at Dallas Theological Seminary. He frequently writes on Pastoral Ministry, Church Leadership, Strategy, and Vision and also serves churches and denominations as a Consultant and Speaker. His new book Re:Vision focusing on the leadership competencies of the turnaround pastor is available for pre-sale and ships to stores in October 2014. He is also a husband, father, grandfather, fisherman, and a diehard Florida Gator fan. | @amalphurs | website