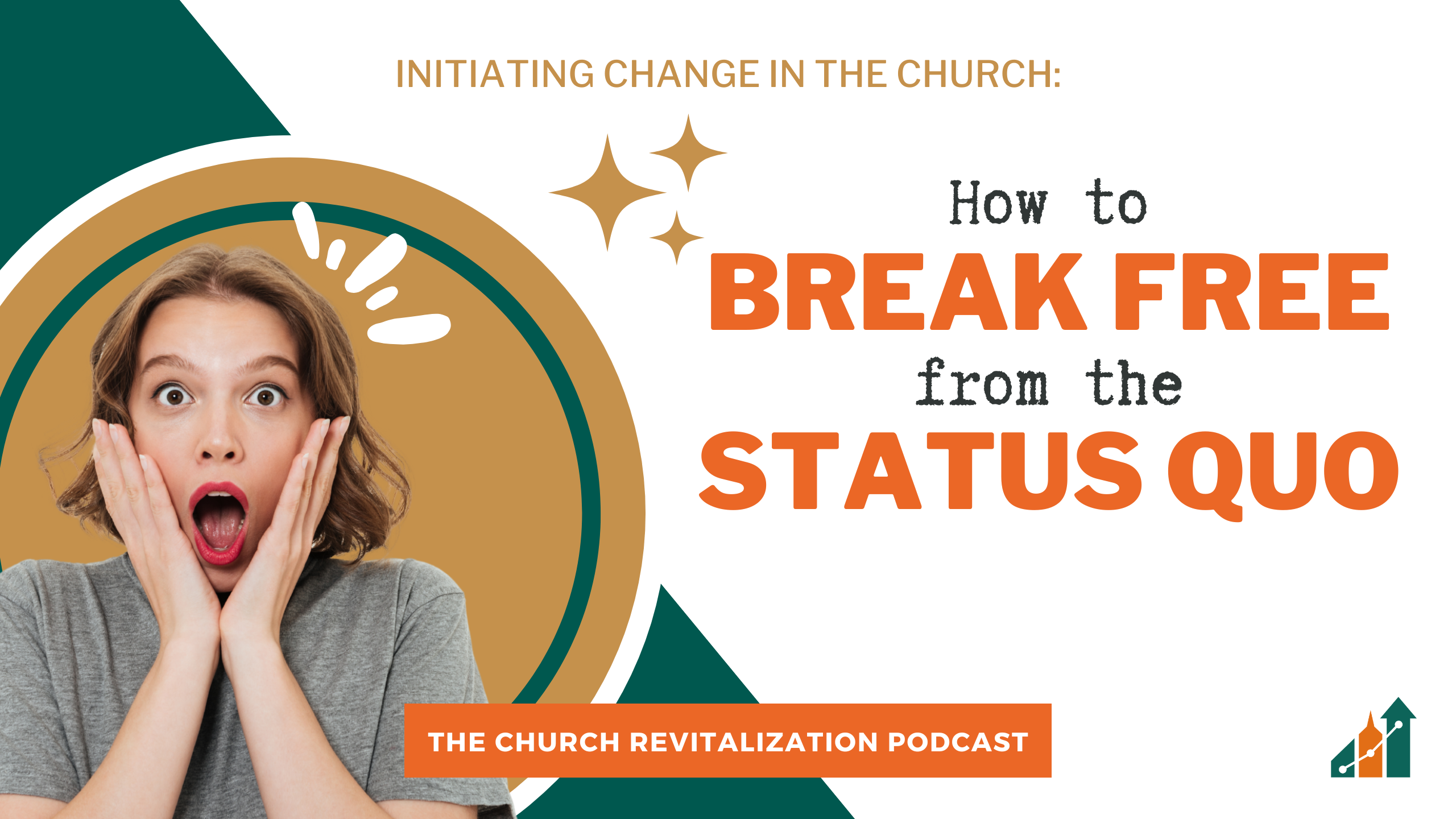 How to Break Free from the Status Quo

Pastors who desire to lead their churches through the change process are constantly sensitive to the various windows of opportunity; they develop “opportunity eyes”. The leaders of change must be proactive; they must act while the window is open. They must understand the process of change and be ready to implement that process as God opens windows to the future. But how do you start that process of change? How can you break your church free when it is frozen in the status quo?

The leader of change initiates the transition process by unfreezing the church’s present situation, especially in churches that cling to the status quo for whatever reasons. If these communities are to move in a new, significant direction, they must become discontent with “what is.” This means that the leader creates discontent with the status quo. Lyle Schaller writes: “In any discussion of intentional change it is almost impossible to overstate the importance of discontent. Without discontent with the present situation there can be no planned, internally motivated and directed intentional change.” And this is the job of the change agent: to “rub raw the sores of discontent”.

But how does this take place? How does the change agent “rub raw the sores of discontent”? We will explore seven ways churches can break free from the status quo.

Identify External Factors That Cause Discontent with the Status Quo

The first is that God creates significant dissatisfaction with the status quo. He accomplishes this through such events as sickness, natural disasters, and various trials and tribulations. In the Old Testament Hezekiah became terminally ill, a large fish swallowed Jonah, the land of Palestine experienced periodic droughts, and Babylon constantly disrupted life in Israel. In the New Testament Paul suffered a thorn in the flesh, and God used persecution to spread the early church in Acts to Judea and Samaria.

God uses “windows” of change: a widely perceived crisis, a change of pastors, a renewal of the pastor, the planting of a church, a renewal of the lay leadership, the counsel of a church consultant, denominational assistance, a revival, a growth seminar, the closing of the church, and so on. Some personal events cause extreme stress such as death, sickness, a jail term, separation, divorce, marriage, and so on. God uses all these events to grab people by the lapels, get their attention, and shake them out of their lethargy.

Paint a Candid Picture of the Future

God also uses change agents to initiate intentional discontent with “what is”. He accomplishes this in a number of ways, all of which rest on the solid foundation of truth. In John 8:32 the Savior says, “Then you will know the truth, and the truth will set you free”. Whatever form it takes, God’s truth has a liberating effect.

Point out the reality of the current situation. Some people cling to the status quo because they view reality as it “ought to be” or they are looking the other way. The agent of change is required to expose the people to the truth. THe average churched person is not aware of how the church might be facing an impending crisis. God’s prophets in the Old Testament, such as Hosea, Amos, Obadiah, Micah, and others, used a similar technique. The change agent paints an ominous, candid picture of the future of the church if it does not change and make the necessary corrections now.

He accomplishes this by giving the people the facts such as the church’s average worship attendance, members, and evangelism efforts over the last five, ten, or fifteen years. Any or all of these are plotted on the church’s life cycle. Next, using this data, the church agent helps the people to project the church’s future in its life cycle and asks, “is this where you want to be five, ten, fifteen years from now?” Finally, he encourages everyone to become involved and rally to turn things around while there is still time. He preaches the reality that if “together we work hard, we can fend off the crisis and make a difference in our community for Christ”. While ineffective leaders typically downplay the ciris, the effective leader uses the notion of impending disaster to motivate the church to engage the crisis and move toward change.

Call Attention to the Church’s Reputation

When a church plateaus, and particularly when it declines, people in the community are aware of what is happening. Churches, like people, develop a reputation, and plateaued and declining churches develop a negative reputation in their individual communities. Both churched and unchurched people in the area may view that church as a battleground for feuding saints or as the rundown facility that is adversely affecting the values of their homes. Wise pastors, like Nehimaih, call attention to the poor reputation and exhort the people to work hard at changing that image.

Remind the Church of Its Better Days

A fourth means is to remind people of the church’s “better days.” This calls attention to the fact that something is terribly wrong with the status quo; things are now what they used to be. The people have either forgotten or started from their former values, which God blessed in the past.

The wise leader will use nostalgia and the difficult circumstances as a foundation to build a better tomorrow. It can serve as a rallying point to encourage people to value evangelism and serve one another in Churist. The pastor calls for a return not to the “good old days” (Philippians 3:13-14) but to the biblical values that made the old days good.

Expose the Dissonance Between the Church’s Ideals & Its Reality

A fifth means of creating dissatisfaction with the present is to proclaim the church’s best interests and desires and show how the status quo works contrary to those interests. For example, people that value their church desire that it live a long, healthy life. However, they must realize that the status quo eventually ends in certain death.

When America was a churched culture, older churches might decline to around twenty or thirty people but would plateau and remain at that size indefinitely. Today most declining churches are not able to apply the brakes and are painfully running off the end of the tracks. The cultural gap and rate of change is so great that older, typical churches are being swept under. The congregation needs to know this.

Present Change as Opportunities Rather than Threats

A sixth means is to present change and innovation as opportunities rather than threats. The typical status quo congregation views change as a threat. Pastors as leaders should make every effort to communicate the positive advantages of change and how it will benefit the people in the church. There are always two sides to every innovation.

The stagnant congregation first looks at the negative side. The leader must force them to turn the innovation over and look at the positive side as well. The leader must regularly remind them of its benefits.

Caleb and Joshua were change agents who used this technique in Number 14:7-8 to remind complaining Israel that the land was exceedingly good and positive proof that the envisioned promised land was flowing with milk and honey. While some today view growth as the enemy of congregational intimacy, leaders must remind them of the benefits of assimilating new people into the church. Newcomers provide a new source of friendships, help to bear the burdensome costs of operating and maintaining the church, and many others.

Challenge the Congregation to Vocalize Their Own Discontent with the Church

A final means is to challenge the congregation to become the best they can be. Since there are no perfect churches, each person in the church is discontented about something they may or may not have verbalized.

The wise change agent will ask people privately to identify all the things in the church that really annoy them. He will collect them and at the appropriate time (a congregational meeting, a sermon, and so on) use them to create a significant feeling of discontent. He could begin by quoting the old cliché “If it ain’t broke, don’t fix it”. Next he could remind everyone that as long as there are no perfect churches, there is something “broke” in every congregation. Then he could cover some of the things that, according to the people, are in need of repair. This would be followed by a challenge to work hard at becoming the best church possible.

As leaders of change seek to unfreeze the present situation, they must realize that they have a proactive role in the process. They themselves are catalysts as they implement the methods above and others.

At the same time, they are not alone in their efforts. God works directly in the lives of the congregation as well to bring stress and added discomfort with the way things are. He, too, is “rubbing raw the sores of discontent”. The combination of God’s direct intervention and his work through the change agent makes unfreezing the status quo a highly probable event.

Editor’s Note: This article was adapted from Pouring New Wine into Old Wineskins: How to Change a Church without Destroying It by Dr. Aubrey Malphurs.