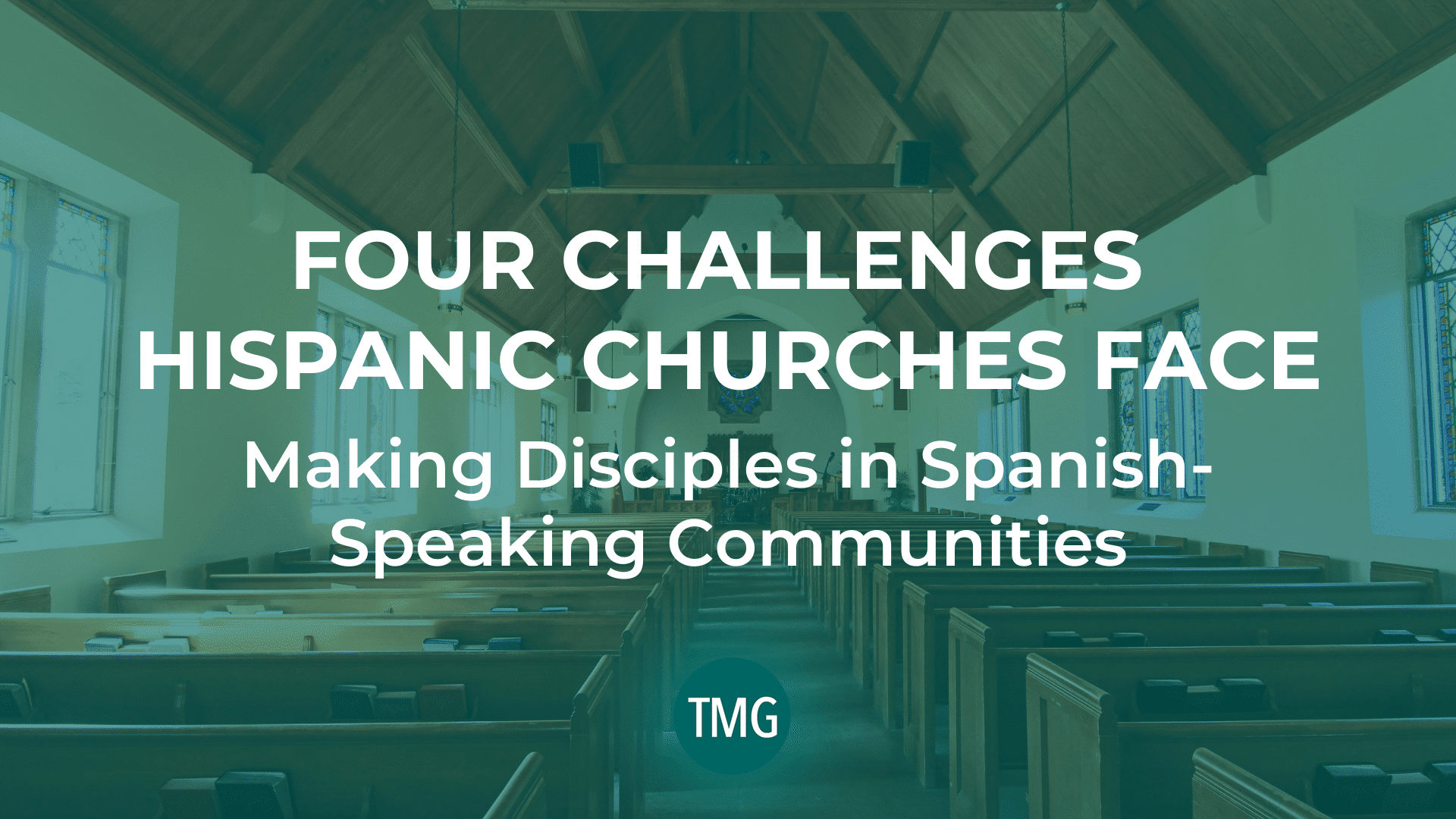 Spanish is the second most spoken native language in the world. While English is more widespread because it’s often a second language, the Spanish language spreads across multiple continents. Moreover, hispanic communities in the United States and beyond are growing, even as Anglo communities are declining in population percentage.

Put simply, if reaching Spanish-speaking communities isn’t on your church’s radar, you will fall behind one of the greatest ethnic shifts of the next century.

At best, most churches in the United States are creating space for parallel ministry—you do your thing, we’ll do ours. It’s far from doing ministry together. As a result, many Anglo and Black pastors are disconnected from the unique challenges that face Hispanic congregations.

While these challenges are evident to some degree in Latin American communities globally, they are especially pronounced in the United States. Here four challenges Hispanic churches face.

This first challenge is specific to the United States, but it is a distinct struggle. Americans often assume that Hispanic communities are homogenous—that because they speak the same language that the culture is the same. So when immigrants from across Latin America move to the United States, there are two external forces.

First, immigrants are implicitly asked to put aside their distinct culture (Colombian, Venezuelan, Mexican, etc.) in favor of a semi-homogenous culture based solely on the Spanish language. At best, your church is offering a Spanish Service—not a Venezuelan service or Cuban service. This can cause an identity crisis, and lead to conflict. Cultural differences are real, and they impact views on theology, leadership, and discipleship.

Second, there is an external pressure for Hispanic churches in the United States to integrate into Anglo culture, particularly among second- and third-generation Latinos. Children of immigrants often feel more comfortable speaking English, even while they feel deep pride in their roots and culture. To navigate this, Spanish-speaking congregations must work to strike a balance between creating safe Spanish-first spaces for new immigrants while embracing certain aspects of Anglo culture—not for the sake of the Anglo community but to honor the next generation and their unique cultural experience.

In the future, Hispanic culture will impact the Anglo community in unexpected ways, and vice versa. Wise church leaders will perceive ways to lean into these shifts when appropriate, and create a safe and positive environment for people to grow into their life in the United States.

Moving from Catholicism to Evangelicalism

The Catholic Church is still the predominant religious expression in Latin American countries and in Hispanic communities in the United States. It is outside the scope of this article to debate the salvation of Catholics in general, but it is undeniable that as Protestant, evangelical churches seek to reach their spiritually disaffected hispanic neighbors, they will have to confront the differences with the Catholic Church.

Those moving away from Catholicism often have a high view of religion, but a low understanding of a relationship with Jesus Christ. Even speaking in terms of a personal relationship with the Lord might be new for some. Often, those with a Catholic background have a limited experience with reading and understanding Scripture. These shifts are not small!

As your church plans to reach hispanic communities, spend time reading and understanding the Catholic tradition. It will give you better understanding and insight as you seek to reach those who are disconnected from the Church.

Like Anglo churches, Hispanic churches are seeing fewer and fewer young people joining into the ministry. As a result, these congregations are declining. This is a shared struggle across cultures, and the advice remains the same: be intentional about identifying and investing in next-generation leaders. Create systems for growing leaders, and be willing to give authority to these emerging leaders.

Another leadership development challenge is the sad fact that many senior pastors of churches with a Spanish-speaking ministry are slow to fully include the Hispanic staff into the team. There is occasionally a language barrier, but more often than not, the greatest gap is relational. If your church hosts a Spanish-speaking ministry or congregation, do not treat them as “other.” Build into the leaders–both staff and volunteers–of these ministries. By building those relationships and bridges, you and your church will reap the benefits.

Most church resources in the United States are developed for English only. Outside of curriculum in Spanish, there are few resources in Spanish designed to help Hispanic congregations think and lead strategically. As a result, most Spanish-speaking leaders are at a disadvantage because they must translate these materials themselves.

More specifically, our team could not find strategic planning resources in Spanish that were easily and widely available. This is wrong. Why should only English-speaking churches have access to tools and resources to help their churches thrive? Additionally, Hispanic congregations are often under-funded, and so resources must be affordable. Every church deserves to get the help they need, regardless of their financial position. This is a core, driving principle for our team.

Iván has recorded all of our training materials in Spanish, and churches can sign up to begin the on-site or online Strategic Envisioning process. We believe that God has big plans for Hispanic congregations in the United States and around the world in the decades to come, and we want to ride that wave and empower these churches to thrive.

If you have any questions about The Malphurs Group Español, please email Iván García today.