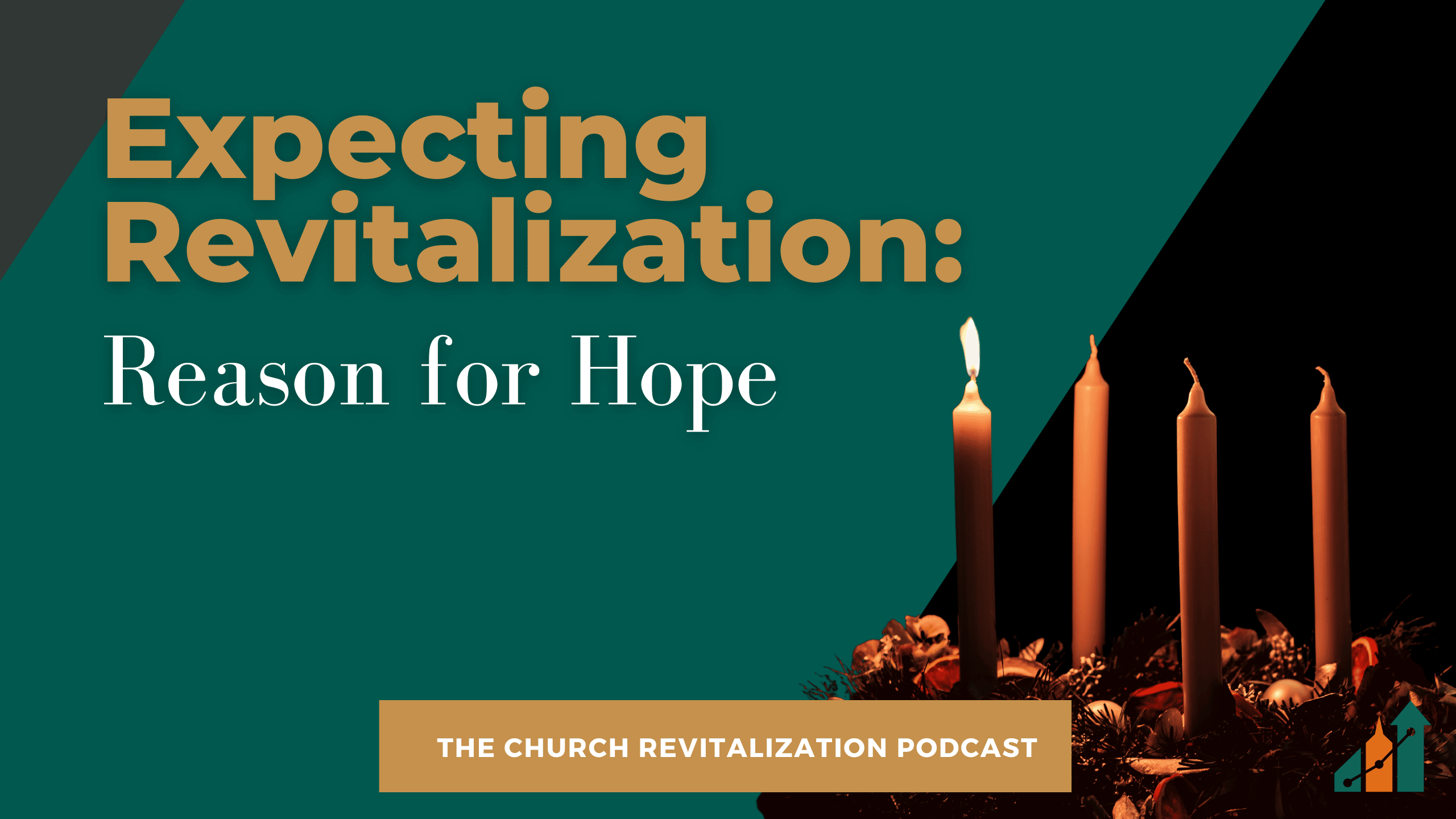 Advent, at its heart, is a season of expectation. When we celebrate Advent, we remember the fulfillment of God’s promises in the birth of Jesus–but we also embrace the sense of expectation for Christ’s imminent Return. In reflecting on this season on our team at The Malphurs Group, we realized that there’s a clear connection between Advent and church revitalization.

Over the next four weeks, we’ll tackle each of the traditional four topics: hope, love, joy, and peace. As you light your Advent Candles each Sunday, we’ll follow up each week with a tie-in to church revitalization and how your church can expect God to bring health and vitality to your church.

The key to this expectation is a proper understanding of the role of hope. Fittingly, that’s the theme of the first week of Advent.

Let’s dive into how hope plays a critical function in empowering your church for revitalization.

There’s a fundamental difference between worldly hope and biblical hope.

The average Christian generally views hope like a wish that’s been baptized in Christian language. For many Christians, there’s little difference between the idea of hope and the tradition of throwing a coin into a wishing well.

As inspiring as these concepts, stories, and songs can be, the reality is that our wishes mostly don’t come true. And the difference between a wish coming true or not isn’t how hard you wished, or how many “good vibes” you put into the universe. I’ve been earnestly wishing for the Dallas Cowboys to win the Super Bowl for two decades! The truth is that while sometimes wishes come true, it’s a great distance between a wish and how the Bible describes hope.

The book of Hebrews describes our hope as an anchor for our souls! In Romans 4, Paul describes how Abraham’s hope in God led him to have an unwavering confidence that his elderly, barren wife would have a child. Whatever you would call this, you cannot call it a wish. This is something wholly different (or perhaps, holy different).

The Bible states that we can have hope because when God makes a promise, we can be certain that He will make good. The book of Hebrews explores this in detail stating that even though it was not necessary for God to make an oath (because He cannot lie), He chose to make an oath by His own name so that we can have double-confidence in His reliability.

Therefore, as a pastor or church leader, you can have full confidence and hope for revitalization because of what Jesus has promised for the Church. If Jesus made a promise regarding His Church, you can be certain that it is true and that the Lord will make good. What then, has Jesus promised for His Church?

Recognize God’s promises for the Church

The Bible is filled with literally hundreds of promises, and it’d take too much time to explore each of them. So forgive my curation, but I want to highlight two key promises of Jesus that especially relate to revitalization.

First, Jesus tells us in Luke 10:2 that “the harvest is plentiful, but the laborers are few.” This statement by Jesus is an explicit promise that if we will be faithful to raise up laborers, there is a harvest of souls to be had. It may seem that this reality isn’t being played-out in your church, and you might feel skeptical.

But in all of my years of working with churches, what I often find is a lack of any clear plan for recruiting, training, and sending out laborers into the harvest. More often, I see churches huddled in their sanctuaries, wishing that outsiders would stumble in of their own accord. But a harvest does not reap itself! Jesus makes it clear that if you’ll be diligent to raise up laborers and send them out, the harvest will take care of itself.

Is your church standing on the promise that the harvest is plentiful, and are you doing what’s needed to raise up laborers? Or are you assuming that the wheat will find its way into the barn on its own?

As with the first promise, many churches will see a dissonance between this promise and their lived experience. We look around and we see the Church in Europe facing a near total collapse, the Church in the United States is declining every year, and fewer and fewer people are finding faith in Jesus–especially in the West. But the reality is that most churches in the West are playing defense.

Jesus is telling you that if your church will stop hiding behind your four walls, and start playing offense, nothing can stop you. Don’t you think Jesus will give you every resource and tool you need to beat down the gates of Hell in your city? Of course He will!

If your hope for your church looks like a fat bank account, a megachurch sized auditorium, and a sweet A/V system, I have bad news for you. That’s a wish that may or may not come true.

But if you place your hope in the promises of Jesus that there is a ripe harvest outside your door, and the gates of Hell cannot prevent you from making an impact in your city–well, that’s a promise you can be certain God will make good in your church.

If we have confidence in God’s promises (hope), it changes our behavior (faith).

The final component is recognizing that placing confidence in God’s promises must change the way that we act.

The book of James makes us uncomfortable because he says that faith without works is dead. But when we understand the concept of Biblical hope, which is the confident expectation of God fulfilling His promises, then this statement from James is much less scary.

When I go to a restaurant and order a hot meal, I have every expectation that the food will be hot. I behave in such a way that comports with that expectation. If, in actuality, I believed that the food would be luke-warm, maybe I’d bring a microwave with me! But no one does this, because we assume (usually correctly) that when you order a hot meal, it will be hot when put in front of you on the table.

Likewise, if we trust that God’s promises are true, our behavior will reflect the confidence that we have in the promise.

Put another way, your church’s behaviors are a direct reflection of what it expects (or hopes for). If I looked at how your church operates, what would I assume it expects?

I would venture a guess that most of you reading this article (if you’ve made it all the way here to the end) that most of you would say that you believe the promises of Jesus that I mentioned above. But there’s a difference between saying you believe it, and genuinely believing it. If you’re not sure, just look at how your church acts and makes decisions. If there’s a gap between what you’d say your church believes and how it behaves, today is a great day to make a change.

Place your hope in God’s promises for your church. Expect revitalization. Have confidence that since the harvest is plentiful and there’s nothing that can stop a church that’s on the move, God will give you everything you need to reap the harvest and beat down the gates of Hell.