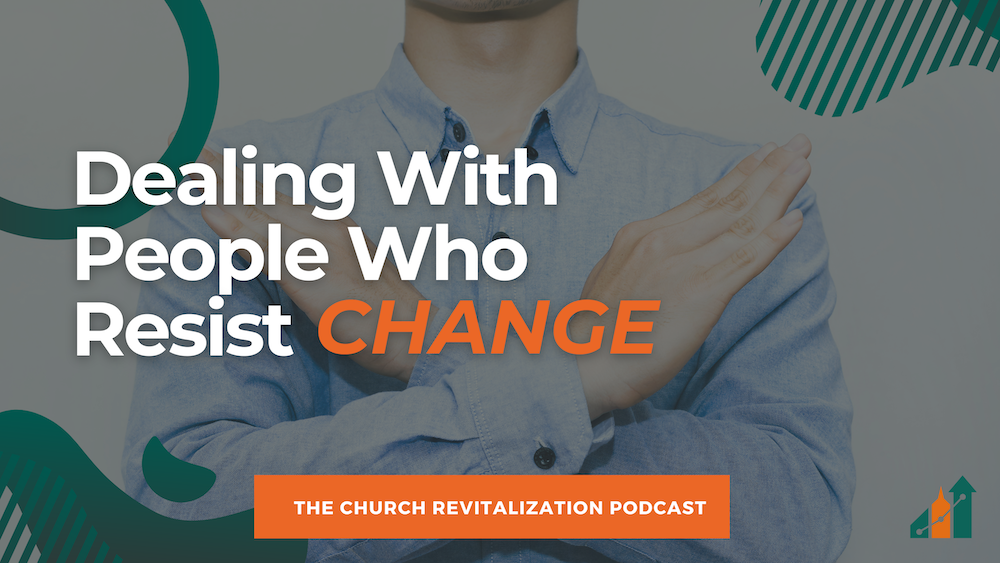 Dealing with People Who Resist Change

Change isn’t easy. Anyone who thinks that their church can turnaround at the snap of a finger has never tried to lead a congregational meeting!

However, since 95% of churches are in decline, plateaued, or only growing via transfer growth, change in the church is critical. In fact, change has never been more critical than it is right now.

Change is possible, but it isn’t easy.

So what do you do when your church commits to change, but some in the church resist? Here are five things you need to do to keep your church on track.

That sounds like a simple tip, but it’s extremely difficult to live out.

Anyone who has kids knows that once you commit to something, you have to follow through. If you say, “If you don’t eat your dinner, you won’t have dessert,” but still give the dessert after they don’t eat, it just breeds distrust. Likewise, if you commit to change but chicken out when people start to complain, you’ve just revealed yourself to be a less-than-competent and untrustworthy leader. That’s harsh, but it’s the truth.

You don’t score any moral victories by giving in when people complain.

Think about the example of Moses. Imagine if he had given in when they started to say, “Let’s go back to Egypt!” Those complaining Israelites quickly learned that their unwillingness to follow God’s call meant that they wouldn’t get to experience God’s blessing.

This is God’s church, and His will is that it would be fruitful. If some in your church are unwilling to do the hard work to change so that you can be more effective at making and maturing disciples, do not be deterred. Keep going. If they leave the church, so be it. Ultimately, they will be the ones who lose out, not you.

It’s entirely possible for people to be on-board with change, but have a difference of opinion in how that change should happen. I know I just made it sound like you should go into change with a battering ram, but that isn’t entirely the case.

You need to be able to know when someone is complaining because they’re change-averse and when someone is simply expressing a different opinion. That takes a degree of emotional intelligence that’s critical for a successful change process.

However, not every opinion is a good one. Sometimes people will spread an idea or thought that simply isn’t true or helpful or good.

In moments like this, it’s important to openly disagree and course-correct, respectfully. Don’t cry out, “You’re wrong!” Don’t say, “That’s dumb!” But also don’t say, “I hear you, sure. Good point,” and then leave it at that. It might not be a good point! Don’t say it’s a good point if it’s a wrong point!

Instead, when people have an idea or opinion that runs in contradiction to where and how the church is changing, you can say something like, “I hear you. I completely understand why you feel that way. But we cannot do it that way, and here’s why…” and then give an explanation.

A lot of us in ministry want to sugar coat things and validate everyone’s opinions. This isn’t helpful. In fact, this is how misinformation gets spread (see point #3). If you start telling people that they have “good ideas” so that they’ll leave you alone when they are in-fact bad ideas, people will start expecting you to act on their “good ideas.”

Once you have a plan for change, you need to stick to it. When people have thoughts or ideas or opinions that run in contradiction to your plan, confront those ideas respectfully but honestly.

3. Confront and correct when necessary.

Several years ago when I was on staff at a church that was building a new campus, the neighborhood next to our property got really upset. They vehemently opposed us building our campus next to them. We were so confused. We couldn’t figure out why they didn’t want us near them.

We were so confused. We had zero intentions of hosting a school in our new building. No one knows exactly how this bit of misinformation started to spread, but it spread like a wildfire.

As soon as we simply said, “Hey! We aren’t putting a school in the building,” people looked around, shrugged their shoulders, and were fine. The zoning and build-out went on without a hitch.

The spread of misinformation is not just likely to happen at your church, I’m tempted to say it’s inevitable.

You need to keep your ear to the ground and catch it before it becomes a groundswell chorus. Misinformation and can turn into disinformation, and they are both major roadblocks to a successful change process.

The best course of action is to get ahead of it. If it’s a small enough issue with a small enough audience, deal with it personally and quickly. If the information has started to spread, send a church-wide email. Get in front misinformation.

Some people will have ill intentions. They are divisive. They are gossips. They are selfish. Quite frankly, they may not even be saved.

If someone in your church is more interested in preserving the comfort of the club atmosphere rather risking their lives for the sake of reaching the Lost, they are sinning. You cannot tolerate this kind of behavior.

Now, it’s worth mentioning again that just because someone is having trouble getting on board, has a different opinion, or is nervous about change doesn’t mean that they’re sinning. Change is hard! So, again, it takes emotional intelligence to be able to tell the difference.

However, when a person is exhibiting destructive, sinful behavior, you must deal with it quickly and personally. Likely, this is a church discipline situation and I encourage you to use the process laid out in Matthew 18.

5. Expose them to reality.

Sometimes people lose their courage to change because they forget the stakes. As the leader, it’s your job to remind them of the stakes!

I don’t know your unique context and the nature of your own crisis, but here are some fast facts about the danger facing the Church in America:

At the macro level, the church is undeniably in trouble. Sources disagree on the specifics, but there is a consensus that a minimum of 4,000 but as many as 9,000 churches close every year.

Like I said in the beginning, 95% of churches are in one of three buckets: plateaued, declining, or growing mainly by transfer growth. Statistically, your church is likely in one of those buckets. Which one? You need to know and you need to tell your church.