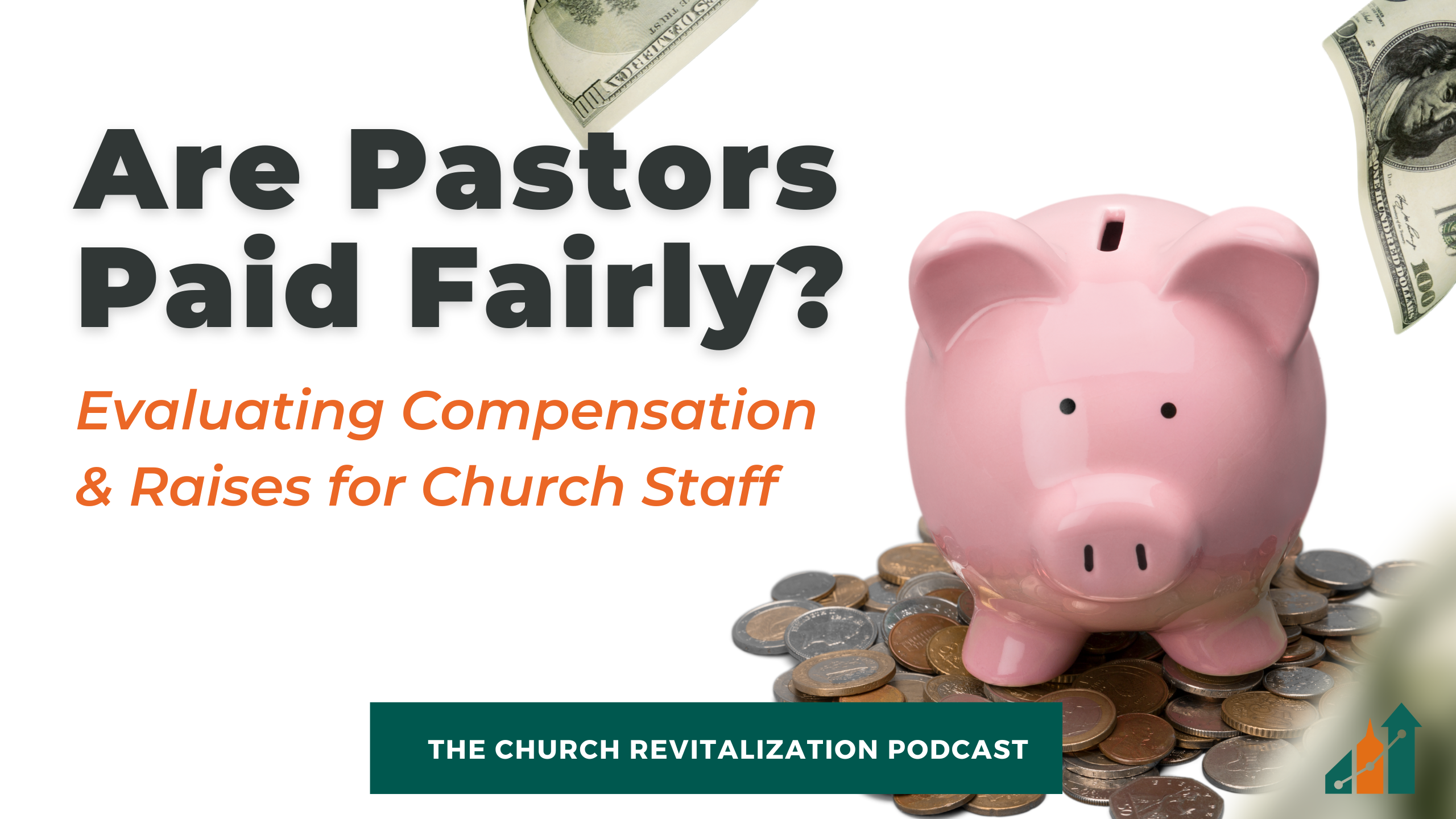 The thought of talking about pastor compensation makes many people uncomfortable. From the pastor’s point of view, he never wants to be seen as greedy or ungrateful, so most do not initiate a compensation discussion with the powers that make those decisions in the church. This is one of the cases in which it really should come from the congregation side of the equation. Not that the entire congregation is involved, but that the matter is delegated to a small group of people by the congregation: a board of elders, finance committee, church council, etc.

A recent Lifeway Research article indicated that Baptist pastor compensation has only increased .2% since 2018 while the consumer price index has increased 17.6% over the same time. Overall compensation packages have actually decreased by over 2%. Of course, the world had a bit of turmoil in that time window, but did the church do enough to make sure that our pastoral leaders were taken care of financially during a very difficult time? Have plans been made to make up for this issue now that a rebound is beginning to take place?

The unfortunate effect of this is that 41% said in a previous study that they worry about their family’s financial security. This is damaging to the whole church when a pastor is in a position that may distract him from his primary ministry and even communion with God due to external pressures.

This week on the Church Revitalization Podcast we looked at why we should pay competitive salaries and some ways in which to consider doing so. 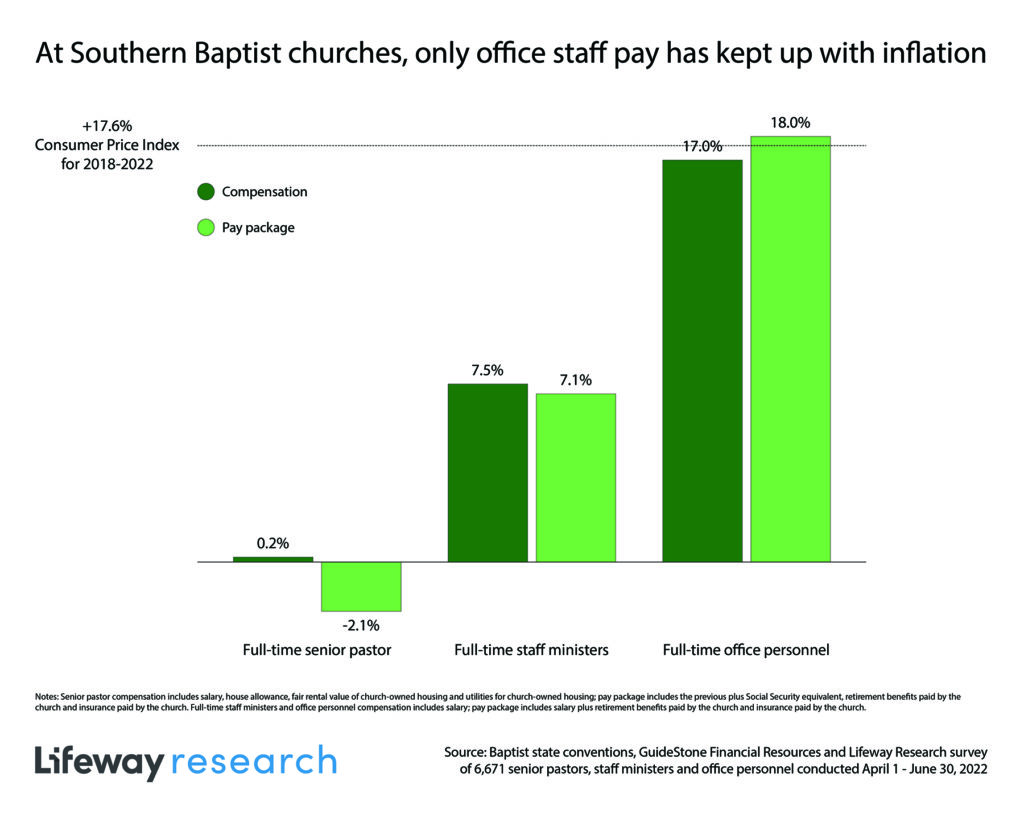 Why We Should Pay Competitive Salaries

The goal in setting salaries is twofold. The first is to obey Scripture. In 1 Timothy 5:17-18, Paul charges Timothy, “The elders who direct the affairs of the church well are worthy of double honor, especially those whose work is preaching and teaching. For the Scripture says, ‘Do not muzzle the ox while it is trading out the grain,’ and ‘The worker deserves his wages.’”

Some believe that Paul is saying the church should pay competent elders twice their salary. Others argue that honor means honor or respect and not salary. Regardless, all agree or should agree that a church is responsible to take good care of its staff. Paul makes much the same argument in 1 Corinthians 9:7-14, where he argues that he has a right to receive compensation but has put aside that right because of others-likely legalists-who have challenged this right and maligned him over it.

The second goal is to retain good staff. The point here is simple. If you don’t take good care of your staff, you could lose them to other ministries. The two passages above make it very clear that staff have a right to expect fair and good compensation.  Accusing good staff of being in the ministry for the money as some do simply repeats what Paul’s detractors said about him in 1 Corinthians 9:7-14.

Not only must you not do this, but you must not allow this to happen in the church. The problem for most pastors is that they find themselves in the “crosshairs” of such accusations. Consequently, this is where a governing board must step up and deal with these kinds of people. Should they persist, it is imperative that the board discipline them.

When to Increase Salaries

Once you’ve determined a person’s salary, you can change it by periodic increases. Thus, raises are an important part of a staff person’s salary. The same goals for setting staff salaries also apply to staff raises. You give them to obey God’s word and retain good staff people. To help you accomplish those goals, we provide you with the following ways to raise staff salaries.

If you’re in an environment, where inflation is a factor (and who isn’t), you must consider an annual cost-of-living raise for all staff.  You cannot pay someone the same amount from year to year and expect them to break even. To do so would mean reducing their salary, not holding it at the same rate. For example, if the inflation rate is 2 percent, you must give all your staff at least a 2 percent raise just to stay even with last year. However, a cost-of-living increase may not be possible under some circumstances.  One would be a church whose giving is plateaued or in decline.  This could be due to a church split, a significant downturn in the local economy, or poor staff performance.

The church should give merit raises based on staff effectiveness. Staff must understand that their raises will become effective when they are effective. This could range anywhere on a continuum from above average performance to exceptional performance.  The increase could range anywhere from 1 to 5 percent or even higher, depending on the church’s income. Finally, the amount of the merit raise should be tied to something measurable such as the expectations on each person’s ministry description.

This is a raise the church gives when it discovers that others with comparable positions in comparable-sized churches with comparable scopes of responsibility in the same part of the country make more money. In essence, it discovers that these people are underpaid, and it wants to bring them up to market value. But what happens when a church discovers that it’s overpaying a staff person? The problem is that it’s much easier to raise than reduce salaries. Therefore, you don’t want to penalize the staff person because you made a mistake. We would suggest that you explain the situation and continue to give them raises but at a slower rate. Should this person leave some day, you could hire his or her replacement at a comparable rate.

You would also want to give a staff person a raise should you add to their scope of responsibilities at the church. When I (Aubrey) was on Lake Pointe Church’s governing board, I used to give Steve a hard time about a clause in the staff job descriptions. At the end of a list of job expectations, there was a clause that said, “And any other tasks a supervisor might assign.” I argued that if we add to a staff person’s job description, we have two options. One was to drop off a comparable responsibility. Another is to give them an appropriate raise.  This raise addresses the latter. The principle is more pay for more responsibility.

Allow us to pause in this section to show how these raises work in a church. Historically, what we’ve done at Lake Pointe Church is to give a cost-of-living increase as a base raise across the board for all staff members unless they have not done their job in the past year and/or if they are on probation.  In addition to that base raise, we have given an additional merit raise of 1-4 percent based on the effectiveness of that staff member.  There are times when we have given a greater raise than that.  This would occur in situations where we’ve increased a staff person’s scope of responsibility or if we have promoted them to a job that is at a higher pay grade.  From time to time, we’ll give a more substantial raise if after reviewing competitive salaries we find we have significantly underpaid a staff member.  Sometimes you discover this when you lose a team member, and you have to go out into the open market to replace that person.  In the process of readjusting the salary for that position to match a competitive market, you may have to adjust the other staff salaries that are on pay levels above that staff position.  The reality is it takes time to make those adjustments, and those changes may have to take place over several years.

Editor’s Note: Parts of the article are adapted from Money Matters in the Church by Aubrey Malphurs and Steve Stroope.