5 Risks Your Church Should Take 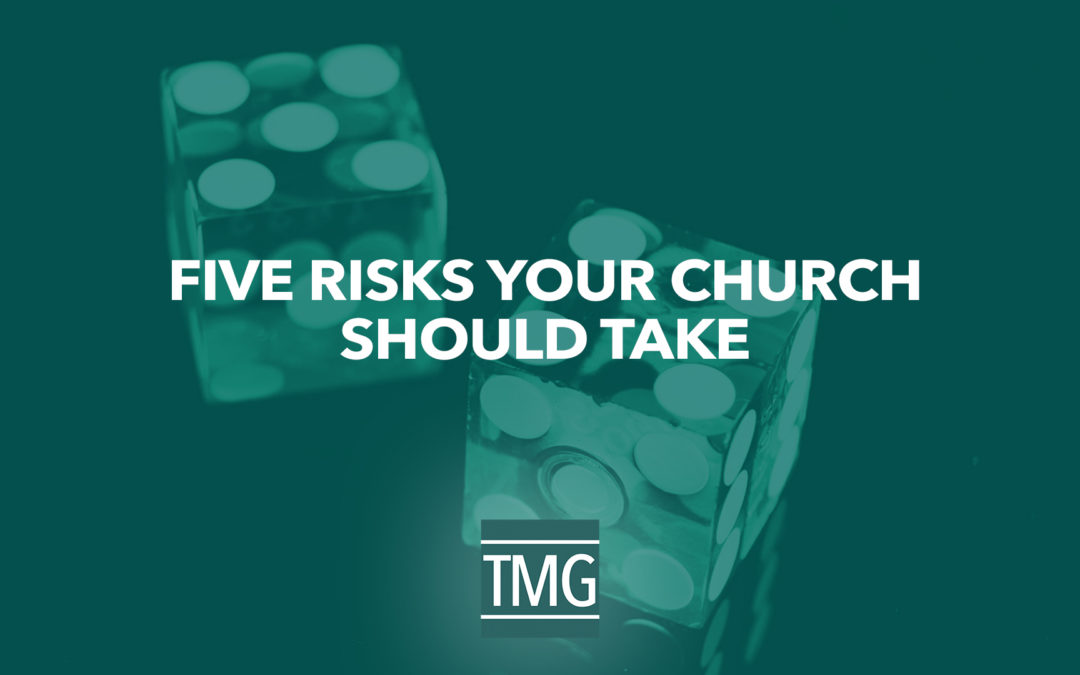 Nothing in life is a sure deal.

You make plans, do the leg-work, and research the details. Some things, despite the planning, don’t work out.

This inherent risk of failure sidelines a lot of churches from making bold moves that could launch them into more significant influence and gospel impact.

But there’s a balance. A big move isn’t always a smart move, and the pay-off isn’t guaranteed.

One church, in particular, has a massive cathedral-like appearance on a campus that seems to stretch for dozens of acres. Thousands of parking spaces line up around a beautifully built and even more immaculately landscaped facility. Being from out-of-town, I asked a local student about the church.

When I was growing up in Dallas, I went to a weekly Bible study for young adults at a large megachurch. Several hundred students showed up from week-to-week at the event, but the place felt empty because it was built for thousands. That church did, in fact, fill-up on Sundays, but I can only imagine if things were to go south how hundreds of people in a room for thousands would be demoralizing.

The Charlotte church had taken a risk, and over time, it hadn’t paid off.

But these cautionary stories should not hold you back.

This article is not about taking a chance on building a massive facility, saddling your congregation with decades of debt.

It’s about risks. The ones worth taking. The risks your church should take.

Here are five risks your church should take this year:

People give money to your church so that ministry can happen, not so it can sit in a bank account unused and uninvested in kingdom work. Be smart, have a few months of reserve built up in case of emergencies, and a bad month of giving or a downturn in the market, but here’s the truth: people give more to churches that are doing more.

I once worked with a church that had tens of thousands of dollars tied-up in an account reserved for the upkeep of a cemetery. There’s more than a little symbolism there. Spend the money, leaders.

Invest in kingdom work. Take a chance on something important. Spend it strategically, but spend it. The Church should be the most active, generous entity on Planet Earth; play your part in that mission.

Your church doesn’t get a crown when Jesus returns for having a year’s worth of budget in the bank.

Shut down the program.

People give more to churches that are doing more of the things that matter. There are one or two or seven programs that your church is doing right now that are a drag on your resources: time, leadership, money, volunteers.

You’ve kept the program(s) around because they matter to a few people or are accomplishing a marginal amount of good. But the reality is that long-term, these programs are slowing you down. You’ve avoided shutting them down because “someone” will be frustrated or hurt.

Now is the time. Shutting down programs that aren’t beneficial to the long-term mission and healthiness of your church is a relational risk your church should take.

God has likely put a dream in your heart to start a new ministry within your church: adding a new service, beginning the process of planting a church or campus, a mission project, a new division within kids, or student ministry, or something else.

Yet you’ve been held back by fears about whether or not it will work or if it will be well-funded. Don’t sit still on a vision from God. Do the due diligence and plan strategically, but then do it.

Launch the ministry. Move forward. See what God will do. There’s a whole process on how to launch something well, but as they like to say in Silicon Valley: “done is better than perfect.” There will be plenty of time to make adjustments to your newly-launched ministry, but get it out there.

Make this the year you finally launch that new thing God put on your heart to do.

Every week I’m on the phone with pastors around the country talking to them about how I can help train and equip their team. I hear it in their voices, this desire to do it–to bring in someone to give their team contextualized training, but there’s the same apprehension: is it worth the cost?

Whether it’s bringing in a leadership consultant or attending a conference, there’s a hesitation rooted in fear of spending “ministry money” on training.

The reality is that the cost of getting training is far less than the price of not getting the training. Healthy leaders lead to healthy churches. Unhealthy leaders, eventually, lead to unhealthy churches. Conferences, traing, and consulting all have a cost, but their value in launching your church into greater effectiveness and impact is often incalculable.

This year, earmark the funds to get the training–whatever that looks like for you.

Too many pastors feel that if they want a job done right, they have to do it themselves. Letting go of a leadership role and empowering someone else to take on the mantle is inherently risky.

It’s true. The newly empowered leader may not do the job as well as you. They may struggle. They may fail. However, if you choose not to enable leaders to take on some of your leadership role this year, it’s a guarantee that you’ll not be able to move into unchartered leadership territory.

Jesus was most assuredly the best man for the job of spreading the good news, but he chose to empower the Twelve. You and I are sharing this moment on this website because Jesus empowered other leaders.

What impact could you have this year if you let go and empowered others to share your leadership load?

You might be thinking, “You don’t know me or my church. I can’t afford to take those risks, not this year.”

But if I had to venture a guess, I’d say it’s more like that you can’t afford not to take those risks.